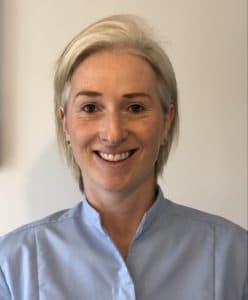 Sarah has experience working for three NHS Trusts and as a musculoskeletal local lead podiatrist and extended scope practitioner. She also has worked in a number of private multidisciplinary clinics, and with the Premier League hockey team at Clifton Hockey Club to provide podiatric input to the players. She has played senior international hockey herself and is currently the O35 reigning world champion, has been ranked in the top 10 in the UK for javelin and is a former member of the England junior ski team.

It is her own experiences of foot and lower leg injuries throughout her sporting career that gave her the desire to help other people with similar problems. Before returning to University to pursue a career in Podiatry, Sarah was a Science teacher. This has given her an insight into child development and a keen interest in musculoskeletal disorders in children. She followed this interest with a summer spent volunteering in Malawi, in clubfoot clinics, working with babies and young children.