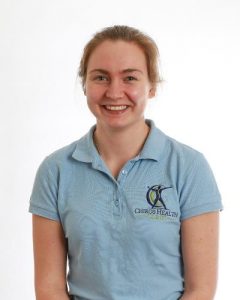 Catherine received chiropractic care from a young age from her mother who is also a chiropractor. Catherine finds the human body fascinating and has always been interested in bio mechanics and the role of chiropractic in facilitating the innate ability of the body to heal itself.

Her mother’s work was a huge influence on her decision to train as a chiropractor herself. Catherine was suffering from dull achy back and knee pain and also pain in both of her ankles.  Some investigation and research revealed that she had severely flat feet, where most people have well developed arches on the inside of their feet, she had none.  This caused all sorts of problems with her lower limbs, putting a lot of strain on certain muscle groups.  She couldn’t stand for long periods of time and it was affecting her life and in particular, her ability to go shopping! She had custom made orthotics after seeing a podiatrist and these along with chiropractic treatments reduced her symptoms significantly.

Catherine is a keen sports woman and has owned her own horse from a young age. She now has three horses and competes regularly in one day events on her mare, Chrissie.  She has played badminton since she was 11 years old and still plays at club level.  Another interest of hers is in classic cars and she has owned a classic Mini City since passing her driving test.